Archaeologists in Israel are working to restore a 2,000-year-old Roman-era basilica that is believed to be the largest in the country.

Experts believe the ancient building in Ashkelon, a city on the Mediterranean coast in southern Israel, dates back to the decades before the birth of Christ, when the region that would later become Israel was under Roman control.

Devastated by earthquakes and millennia, it is now being rebuilt and will welcome visitors again in the coming months.

Pictured: An aerial view of the Ashkelon Basilica. Archaeologists from the IAA are working on restoring the 363 earthquake-destroyed structure and making it accessible to the public

Ashkelon was founded about 8,000 years ago in the Neolithic and attained in the Middle Bronze Age between 2000 and 1550 BC. Famous as the largest port city in Canaan.

It was established in 1150 BC. Conquered by the Philistines and often waged war with the Israelites until it was in the 7th century BC. BC fell to the Babylonians who destroyed it.

The city was eventually rebuilt and after the conquest of Alexander the Great in the 4th century BC. In BC Ashkelon became an important seaport again.

Archaeologists believe that the basilica they uncovered was built during the reign of King Herod the Great, a Roman vassal king of Judea who died in 30 BC. Chr. The power took over. 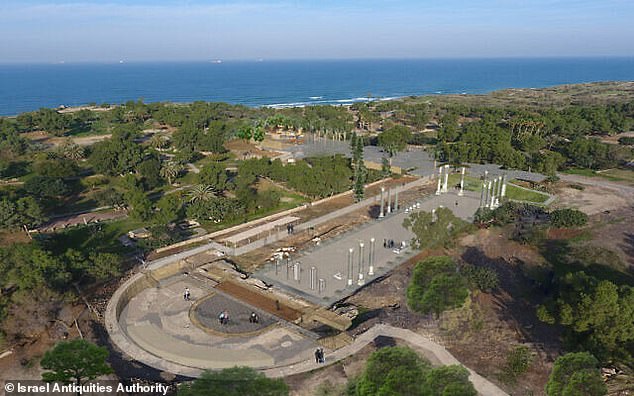 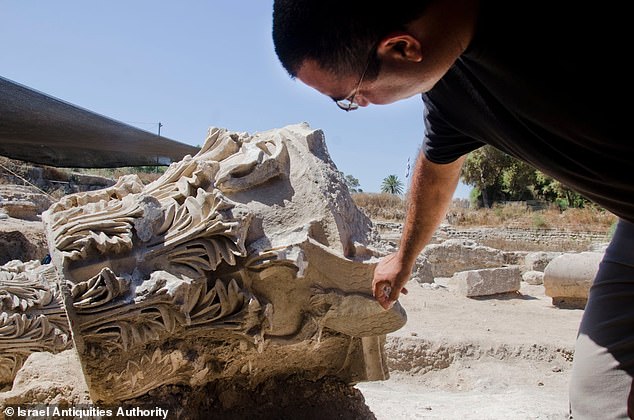 The archaeologist Saar Ganor points to a column motif of an eagle, the symbol of the Roman Empire

Judea stood from the first century BC. BC to the fourth century AD under Roman control.

“Herodic coins discovered in the bedding of the ancient floors of the structure show that one of the greatest master builders in the country was building it at the time,” said IAA excavation directors Rachel Bar-Natan, Saar Ganor and Fredrico Kobrin.

One discredited theory holds that Ashkelon was the birthplace of Herod, although he is known to have built bathhouses, fountains, colonnades, and other buildings in the city. 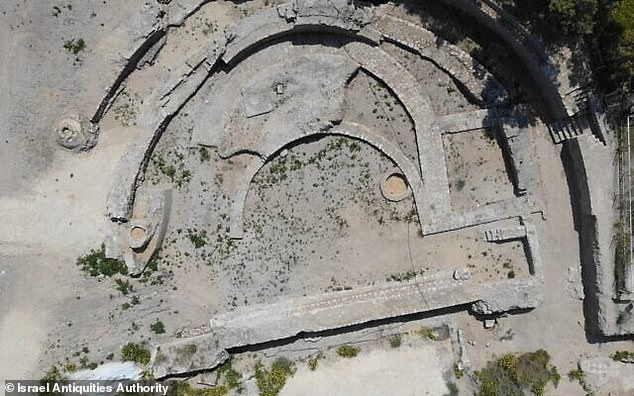 During Roman times, when Ashkelon was a busy port, public life revolved around the basilica, according to a spokesman for the Israel Antiquities Association.

The huge building would have been covered with a roof and divided into three parts – a central hall and two side halls, added the group of excavation leaders of the IAA.

“The hall was surrounded by rows of marble columns and capitals that were an estimated height of. achieved [42 feet] and propped up the roof of the building. ‘

The marble, which was also used for the floor and roof, was imported from Asia Minor.

The basilica was extensively renovated in the second and third centuries AD during the Roman Severan dynasty, when architectural elements of marble were incorporated and a small odeon or theater was added. 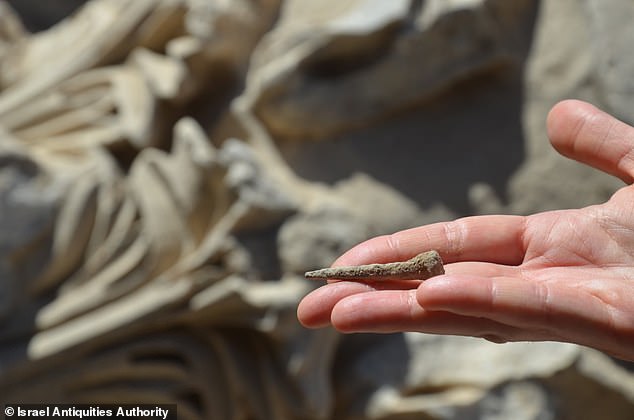 After earthquakes, looting, and centuries, architects in Israel are working to restore the basilica and place sculptures and columns in their authentic locations 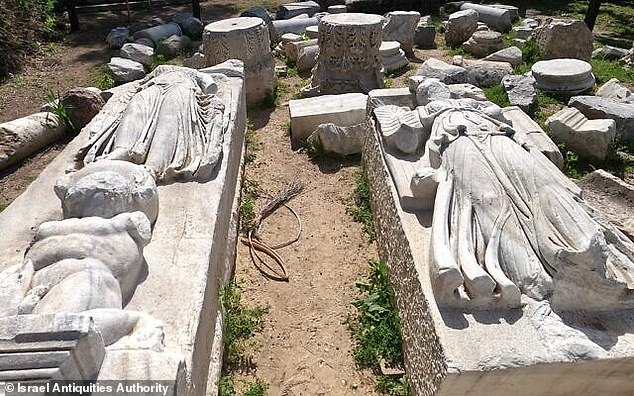 In the 1920s, British archaeologists discovered a massive statue of Nike, the Roman goddess of victory (left) standing on Atlas and holding the globe, as well as a statue of the Egyptian deity Isis as Tyche, (right) daughter of Aphrodite and goddess of fortune

However, when a severe earthquake struck the region in AD 363, the basilica was destroyed and abandoned.

According to the researchers, “the effects of the seismic waves on the floor of the building are clearly visible”.

During the Muslim control of the area, some of the ruins were incorporated into other buildings.

“There is evidence from the Ottoman period that pieces of marble were cut for use as paving stones and that some of the beautiful architectural features were used in the construction of buildings,” an IAA spokesman said in a statement.

Excavations first began in the 1920s when British archaeologists unearthed a massive statue of Nike, the Roman goddess of victory, which stood on atlas and held the globe.

They also discovered a statue of the Egyptian deity Isis as Tyche, daughter of Aphrodite and goddess of luck.

However, under the guidance of renowned archaeologist John Garstang, the British re-covered the ruins as was customary in order to preserve them further, according to Haaretz. 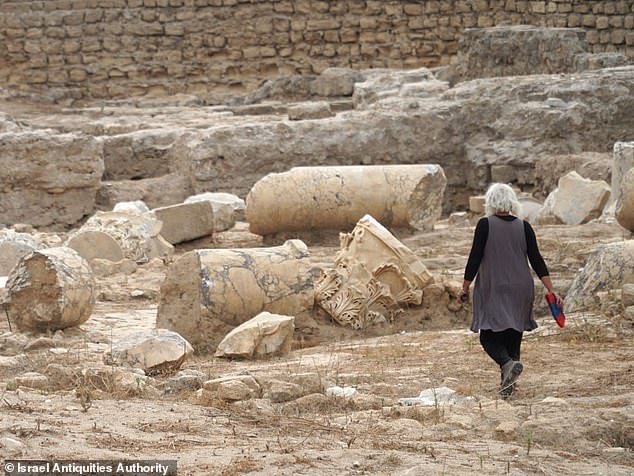 Archaeologists estimate that the basilica was about 330 feet long and 130 feet wide, with a colonnade of 42 foot high columns

A total of around 200 pieces of marble weighing hundreds of tons were uncovered, including dozens of column capitals with plant motifs or with the image of an eagle, symbol of the Roman Empire.

Now archaeologists are trying to restore parts of the building destroyed by the earthquake and to place sculptures and columns in their authentic places.

They estimate the structure was about 330 feet long and 130 feet wide, with a colonnade of 42 foot high columns.

A dozen-ton pillar was lifted into the basilica and the floor of the structure is being restored and filled.

At the southern end the statues of the gods and goddesses will be placed, while the Odeon will be preserved and renovated with modern seating and a stage. 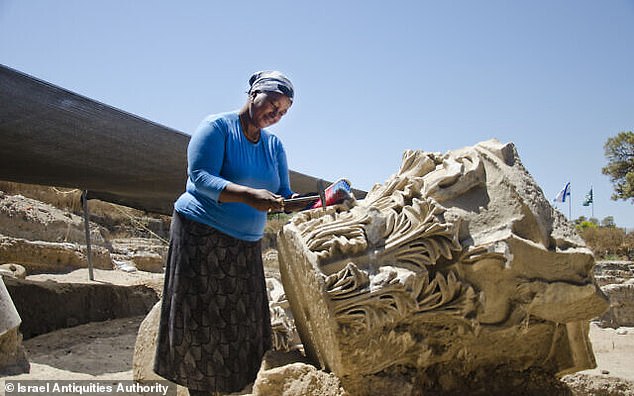 The huge building would have been roofed and divided into three parts – a central hall and two side halls, surrounded by rows of marble columns and capitals. Pictured: one of the basilica’s massive capitals.

When the project is complete, visitors can walk through the basilica, the largest in Israel.

A collaboration between the Israel Antiquities Authority, the Israeli Nature and Parks Authority, the City of Ashkelon and the Leon Levy Foundation the unique nature, heritage and landscape of the park, “it said in a statement.

Ashkelon Mayor Tomer Glam said the project would “add significantly to the natural beauty of the park and strengthen its status as the most beautiful and best-preserved national park in Israel”.

The IAA did not announce when the project is expected to be completed, although visitors will be able to sit in the seating at the Odeon “in the coming months” and watch the work on the nearby basilica.