By Dan Avery for Dailymail.com

As drones become an increasingly large part of modern warfare, the armed forces are developing creative ways to deactivate them.

The US military recently demonstrated a drone interceptor that fires pink “silly string” -like streamers at unmanned vehicles, sticking their rotors together and crashing them to earth.

The goal is to develop anti-drone technology that, according to the Defense Advanced Research Projects Agency (DARPA), will not cause as much collateral damage as explosives and will be used in populated areas.

In a video released this week, DARPA demonstrated C-UAS at Eglin Air Force Base outside of Valparaiso, Florida.

After taking off from a stationary vehicle, the interceptor aimed at a drone hovering over a field, “using a newly developed X-band radar that automatically detects and identifies threats from unmanned aerial systems.”

The interceptor then fired at the enemy drone’s propellers in what DARPA refers to as “strong, stringy streamers”, which “caused propulsion losses”. 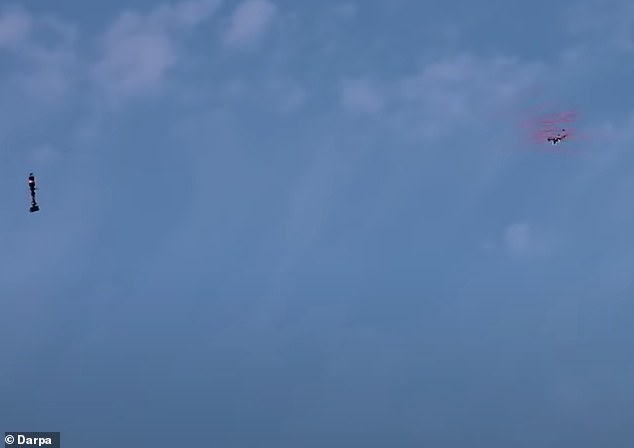 The C-UAS fires a volley of stringy pink streamers at the drone, binding its rotors and causing “loss of drive”.

Although the video of the demo only shows the action from a distance, it is still possible to see the drone wrapped in a pink cloud before it crashes to the ground.

It is not clear what the “streamers” are made of, but DARPA indicated that the interceptors are inexpensive, reusable, and can be launched en masse to deal with multiple threats.

Traditional drone interceptors are armed with explosives, but C-UAS could be used to protect a military convoy moving through a populated area with less risk. 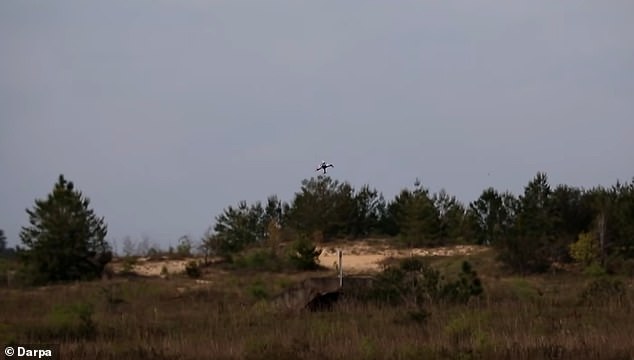 “Because our focus was on protecting mobile assets, the program focused on solutions with a small footprint in terms of size, weight and performance,” said Gregory Avicola, director of DARPA’s Mobile Force Protection program. “This also enables more cost-effective systems and fewer operators.” 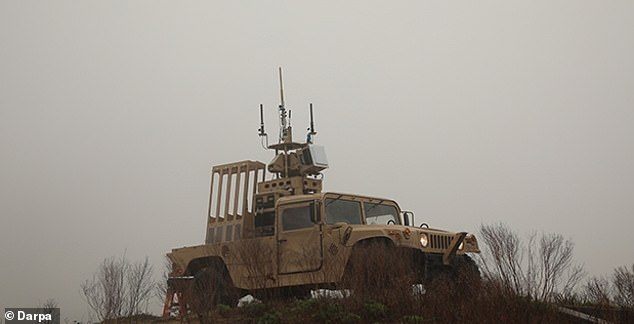 The interceptor is said to be fired from the back of a small, fast-moving vehicle

The Mobile Forces Protection program, which DARPA completed, demonstrated other non-explosive drone interceptors at Eglin AFB, but did not provide any details or footage.

In May, a UN report suggested that autonomous drones may have attacked people for the first time last year during a skirmish between the Libyan government and rebel forces.

Kargu-2 quadcopter drones were reportedly deployed in March 2020, using their on-board cameras and AI to find and target enemies retreating from Tripoli.

The drones then struck the fighters in a kamikaze style and detonated their explosive charge on impact.

No deaths have been confirmed, but similar systems have caused “significant losses” in other encounters, according to the UN Security Council Expert Panel on Libya report.