Fixing NHS waiting times could cost the UK up to £ 40 billion, according to leaked estimates from No10.

Downing Street documents produced by the Cabinet Office show Boris Johnson will have to invest between £ 2 billion and £ 10 billion each year for the next four years to meet secured waiting lists, The Guardian reported.

The huge sums are on top of the NHS ‘core funding – but will depend on the Treasury Department topping up the money to tackle the growing problem.

Damning statistics showed yesterday that the NHS waiting list for routine surgeries in England exceeded 5 million for the first time ever in April.

The statistics, published for the first time, also showed the true extent of the NHS backlog: Nearly 65,000 patients waited at least 18 months for routine operations such as hip and knee replacements.

About 2,700 patients were untreated within two years.

Hospitals turned their attention to treating coronavirus patients during the first and second waves and canceled thousands of non-urgent procedures.

However, according to a government source, No10 is reluctant to invest money to clean up the huge backlog.

Ministers believe the public is not yet “concerned” enough about the long delays to warrant additional spending, a source said. 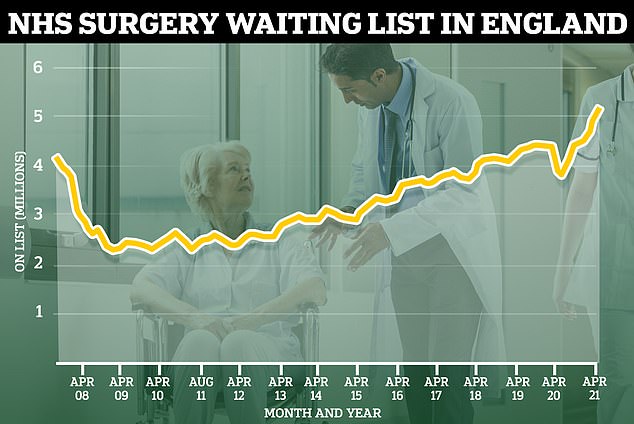 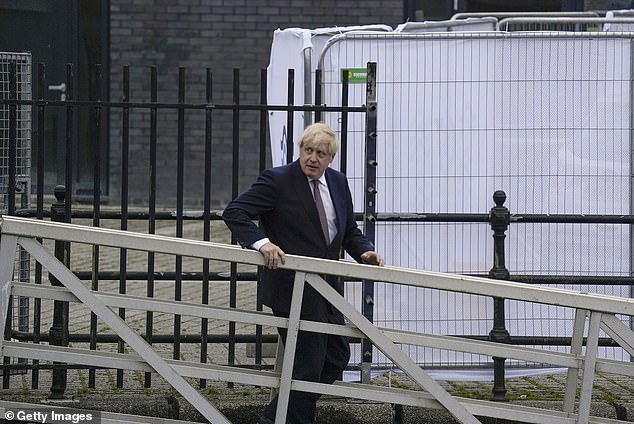 Fixing NHS waiting times could cost the UK up to £ 40 billion, according to leaked estimates from No10. Pictured: Boris Johnson on a visit to the Falmouth Maritime Museum ahead of the G7 Summit in Cornwall yesterday

The numbers were produced by the cabinet office – led by Michael Gove – as part of its post-Covid planning to support the health, education and justice sectors.

Many are advising Gove to take over the post of Minister of Health after Matt Hancock, who was grilled by MPs yesterday for his handling of the pandemic.

No10 will conduct a full spending review this fall after NHS England provides a full analysis of how it can achieve its goals.

The NHS already receives around £ 160 billion from the Treasury every year. Last year it received an additional £ 60 billion to fight Covid.

The Royal College of Surgeons of England has urged the government to make waiting times its “top priority”.

His Vice President Tim Mitchell said: “Today in England we unfortunately reached the grim milestone of more than 5 million people on the NHS hospital waiting list.

“Really long waits of more than a year and in some cases more than two years are particularly worrying. These are people who are waiting for operations such as hip and knee replacement or ear, nose and throat operations.

“This is a life changing operation that we are talking about. Surgeries that help people reintegrate into work, relieve pain and restore a decent quality of life to people.

“Operations in many hospitals are near pre-pandemic levels thanks to staff working Saturdays and evenings to catch up, although many of them are tired of last year’s experience.”

He added: ‘Tackling this huge backlog will require new investments in both staff and infrastructure.’

Dr. Nick Scriven, past president of the Society for Acute Medicine, said: “Warning signs of where the NHS was headed were clearly visible a few years ago and what we are seeing in the most recent monthly data is the result of a lack of preparation for the inevitable”.

Dr. Sonya Babu-Narayan, the British Heart Foundation’s assistant medical director, said the “monumental delays” likely contributed to the thousands of additional deaths from heart disease and stroke in England during the pandemic.

NHS finance expert at the Health Foundation’s think tank, Professor Anita Chalesworth, estimates ministers will have to spend £ 6 billion a year on health care for three years to fix the backlog.

She told The Guardian: “The health service has to climb a mountain now.

“To reduce the backlog of long waiting times and to put the NHS in a position where waiting times are consistently respected, a substantial increase in funding will be required.”

Downing Street declined to comment on the leaked numbers.

The Department of Health and Welfare said: “We are supporting the NHS with £ 1 billion to meet the waiting lists that have built up and to provide up to 1 million additional checks, scans and surgeries.

“And the NHS is allocating £ 160 million to explore innovative ways to accelerate elective recovery in key areas and enable more hospitals to move faster.

“That is on top of an additional £ 7 billion in funding that we will provide for health and care services this year.”

NHS England data released yesterday showed the number of patients waiting for care for over a year reached 385,940 in April.

Figures show that 223,780 people were admitted to hospitals for routine treatment in April, compared with 41,121 patients in the same month last year – when Covid began to hit the NHS.

Separate figures from NHS England released today showed that over 2 million people attended A&E in May, the highest number since January 2020.

The number of A&E visits dropped to 916,575 in April 2020, the lowest number since records began in 2010, as people stayed at home during the initial lockdown for fear of contracting Covid.

Since the pandemic began, the highest number of people visiting the emergency room each month has not risen above 1.8 million.

The NHS data also shows primary care physicians made 209,452 urgent referrals for cancer in April, more than double the number of 80,031 last year.

Professor Stephen Powis, National Medical Director of NHS England, said it was “encouraging” that the data shows that routine surgery, cancer and psychiatric care have “declined dramatically” after the “extensive disorder” caused by the pandemic.

He said the NHS was “obliged to restore services to pre-pandemic levels”.

“The reality is that the Tory have been underfunded for years and healthcare cuts have weakened and suspended our NHS once it entered the pandemic, with patients now having to wait even longer in pain and fear for treatment,” he said.

After more than a year of delays, Universal's "F9" is finally coming to domestic cinemas.The ninth installment in the...