The music you listen to with meals can affect the types of food you eat. This is the result of a new study by Aarhus University in Denmark, which compared the food choices when people listened to different types of music.

One group heard slow music, the other a fast-paced, less harmonious minor composition that is known to evoke emotions such as sadness or tension.

In the journal Appetite, the researchers report that the group with slow music was more likely to choose healthier foods.

Perhaps because the group was not distracted by the music or experienced negative emotions from it, they paid more attention to better food choices. 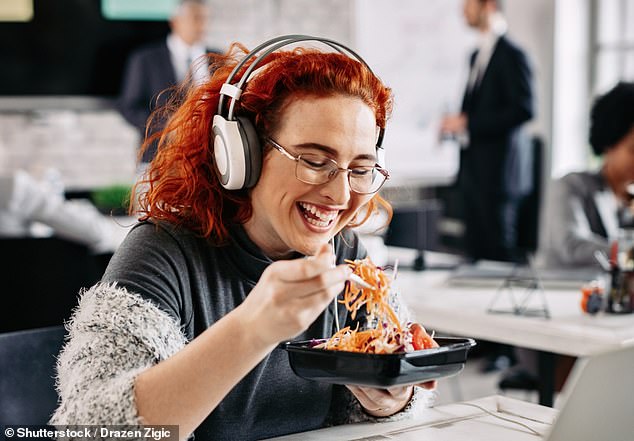 The music you listen to with meals can affect the types of food you eat. This is the result of a new study by Aarhus University in Denmark, which compared the food choices when people listened to different types of music

This is not the first time that noise has been shown to affect our diet.

In 2013, researchers at the University of Birmingham analyzed 24 studies on the effects of distraction from noise and visual stimuli such as television and found that not only do we eat more at one meal when we’re distracted, but more the next, too .

It is believed that this is because when deciding what to eat with one meal, we unconsciously also take into account the consumption of the last and balance our intake.

But when we are distracted, our memory of the last meal is not as strong and our internal balance system does not work as well.

In fact, some experts say that music – or other annoying noises like watching TV or talking – should be avoided with meals and suggest that it is an effective tool for controlling food consumption.

In New York, a movement to start the day with a quiet breakfast at home has gained momentum to help manage the stress of the pandemic. 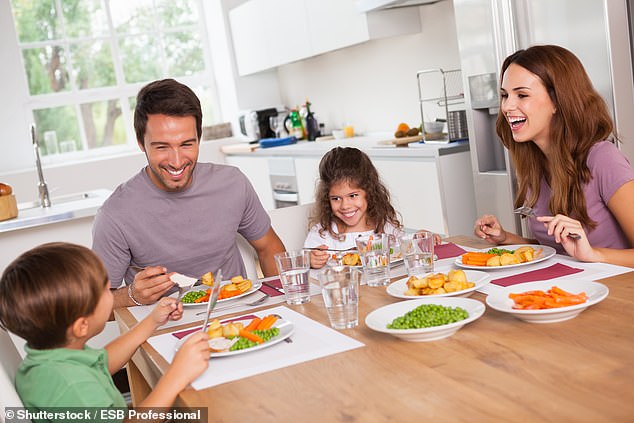 In fact, some experts say that music – or other annoying noises like watching TV or talking – should be avoided with meals and suggest that it is an effective tool for controlling food consumption

Meanwhile, “mindful eating” (part of which focuses on eating slowly without interruption) is listed in Germany’s national nutritional guidelines as a way of tackling all meals and snacks. But how does eating in silence help you?

“It simply reduces distractions that can encourage overconsumption and potentially increases meal enjoyment,” says Professor Jason Halford, a specialist in psychology and obesity at the University of Leeds. It also triggers a phenomenon known as the “crunch effect” by researchers who believe that listening to loud food encourages you to slow down your eating.

The term was coined in 2016 by scientists at Colorado State University in the United States who found that people ate 31 percent fewer pretzels when they could hear themselves eating.

“We believe that crunching creates natural ‘pause points’, a moment during a meal when the consumer becomes more aware of their behavior and possibly takes into account the amount of food they are consuming,” said study co-author Professor Gina Slejko, versus Good Health. As a result, they may then slow down or stop eating.

Still food can also draw your attention to taste.

“In our mindful eating workshops, we’ve had people who have eaten the same type of sandwich for lunch for 20 years that they don’t really like it after eating it more mindfully, that is, more slowly and thinking about how the food tastes and smells and feels, “says psychologist Christine Wade-Ramsey from the Center for Appearance Research at the University of West England, Bristol.

“Others realize that the first bite of a chocolate bar is what they enjoy the most, so they don’t need the whole bar. Focusing on taste and enjoyment also helps you realize that feeling full and contentment are not the same thing. This can change your consumption. ‘

And there is another reason for quiet consumption.

A study published in the Korean Journal of Medical Science last November found that speaking loudly indoors is linked to greater transmission of Covid-19.

But total silence cannot work for everyone. “It can be especially difficult for people who use food to hide or distract from their emotions,” says Christine Wade-Ramsey.

She suggests that the silence forces her to dwell on these feelings, saying, “It can be harder than you think because we’re just not used to sitting quietly with no distractions”.

So if you find it difficult to sit still, try playing background music softly while you eat, but make sure it has a slow beat.

This is because your body tends to adjust to the beat of the music, and slow chewing can give your body time to register a feeling of satiety.

“If you don’t want to spend your entire meal in silence, focus on just eating the first five bites of your meal without speaking, and instead pay attention to everything related to the food,” suggests Christine Wade-Ramsey .

You could then move on to one silent meal a day or even a week. “It will feel strange at first, but it’s a skill you can relearn,” she adds.

It can help you regain control of your appetite and, if nothing else, will make your food more enjoyable.