Skeleton of a Roman slave in shackles discovered in Rutland

Skeleton of a Roman slave in shackles discovered in Rutland

Archaeologists in Rutland have identified an “extraordinarily unusual” skeleton of a Roman slave who may have been a criminal thrown into a humiliating death.

The adult man was found buried in a ditch, secured to his ankles with a set of iron shackles, which experts say indicates “malice” by those who had power over him at the time of his death.

He was discovered in an “uncomfortable” burial position – slightly on his right side, left side and arm raised on a slope – suggesting that it was informally dumped in a ditch rather than a proper grave.

The “internationally significant” find marks the first burial of a man with lockable ankle cuffs found in Roman Britain and discovered by construction workers working on a house extension in the village of Great Casterton.

Radiocarbon dating carried out by the Leicestershire Police Department showed the remains to date between AD 226 and 427. 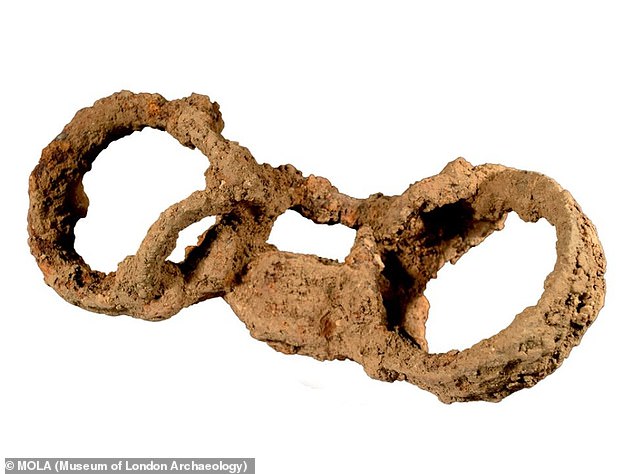 Great Casterton’s Roman funerary shackles. Analysis of the skeleton suggests that the man who wore the shackles on his ankles led a physically demanding life 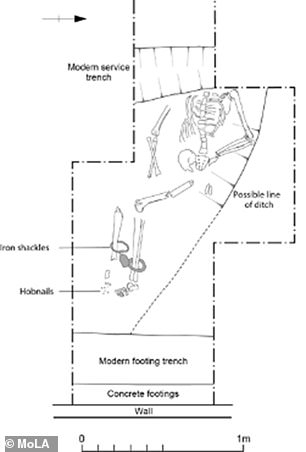 Looking at the burial itself, the unfavorable burial position – slightly on his right side, with his left side and arm raised on a slope – suggests that he was informally buried in a ditch rather than in a proper section of the ditch

Archaeologists from the Museum of London Archeology (MOLA) were called in to fully analyze the internationally significant find using X-rays and other methods.

“For live porters, shackles have been both a form of incarceration and a method of punishment, a source of discomfort, pain, and stigma that can scar even after removal,” said Michael Marshall, a lost and found specialist at MOLA.

“However, the discovery of shackles at a funeral suggests that they may have been used to exercise power over the dead and the living, suggesting that some of the symbolic consequences of imprisonment and slavery could even extend beyond death.”

Examination of the skeleton suggests that the man led a physically demanding life, according to MOLA.

A bony spur on one of the thigh bones may have been caused by a traumatic event, such as a fall or blow to the hip, or a lifetime of excessive or repetitive physical activity.

Although this injury healed by the time he died, the cause of his death remains unknown.

Marshall told the Guardian that he may have been someone who “earned other people’s wrath”.

“Or it could be that the people who buried him were tyrannical and terrible,” he said. “We can’t really understand the moral dimensions.” 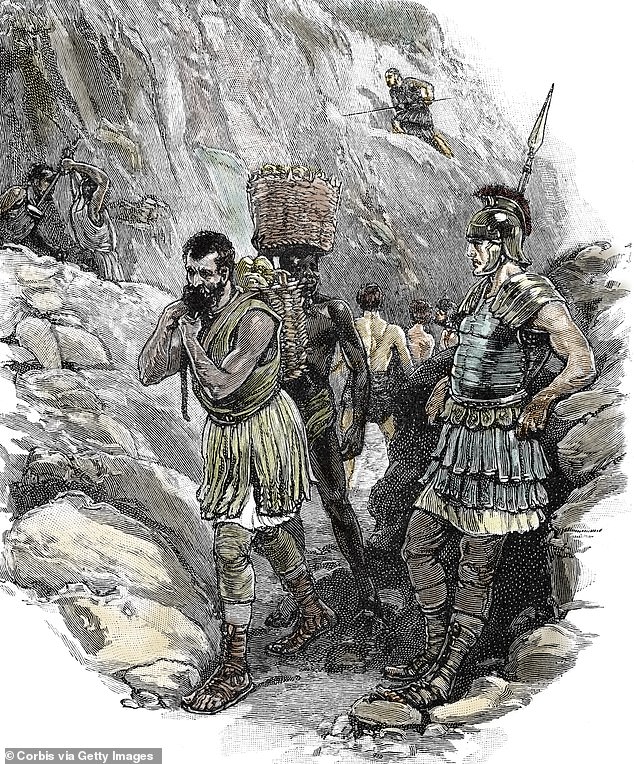 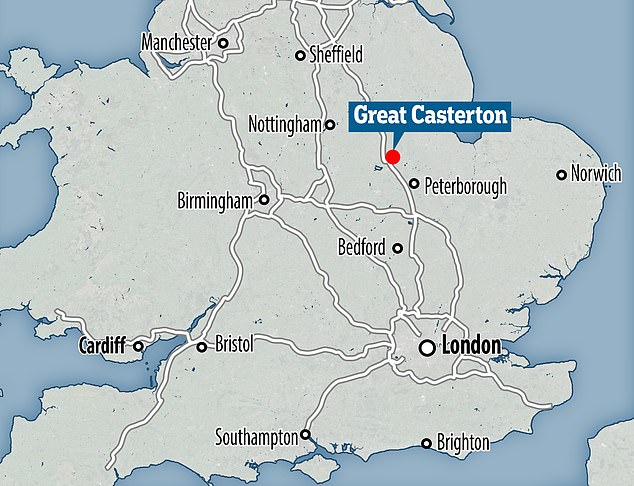 The slave was found by construction workers working on a house extension in the village of Great Casterton, Rutland

Significantly, there is a Roman cemetery just 60 meters from where it was found.

So it was likely that people at the time were consciously trying to separate or distinguish him from those buried in the cemetery as part of his humiliating punishment.

Slavery was commonplace in the Roman Empire and is described in written sources from that period, but shackles are very rarely found on human remains. 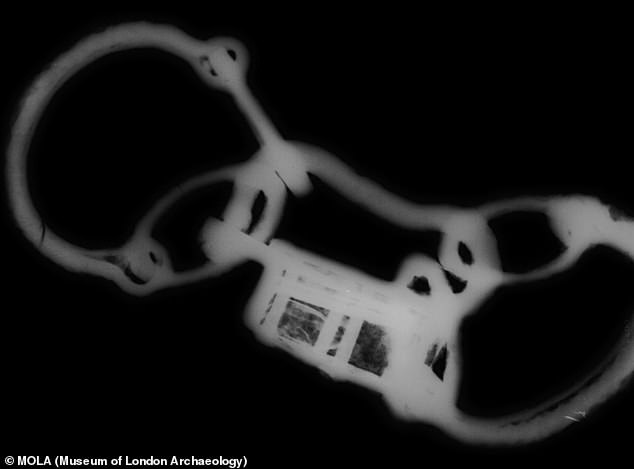 An x-ray of the Great Casterton shackles and padlock. The cause of death of the man is still unknown

Iron shackles are one of the few artifacts from this period with a strong direct link to slavery and have been found at archaeological sites throughout the Roman Empire.

There are a small number of burials found in the UK with heavy iron rings around their limbs and some of these people have also been beheaded.

However, unlike the Great Casterton Shackles, it likely wouldn’t have been functional shackles worn in life.

They could have been added in death and are therefore likely to be symbolic shackles intended to humiliate the dead or to brand the wearer as a criminal or slave in the afterlife. 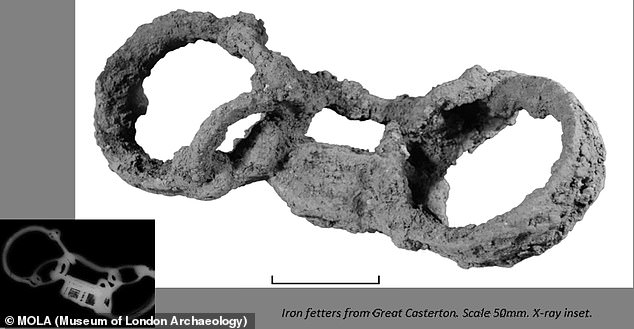 To get a picture of the life and identity of the man buried in Great Casterton, and to understand the meaning of the shackles, MOLA’s experts conducted detailed research, including X-ray analysis

Some Roman written sources also mention the use of iron shackles to prevent the restless dead from rising and affecting the living.

The identity of the man from Great Casterton will never be known for certain. Also, experts aren’t sure if he was enslaved while he was alive or why his shackles weren’t removed for reuse.

“The accidental discovery of an enslaved person’s burial in Great Casterton reminds us that the remains of enslaved people are often difficult to identify, but that they existed in Britain during Roman times is undeniable,” said MOLA archaeologist Chris Chinnock.

“Therefore, the questions we are trying to answer using the archaeological remains can and should recognize the role of slavery throughout history.”

MOLA told MailOnline that due to a policy on the use of images of human remains it would not post images of the man’s skeleton.

The results were published in the journal Britannia.

How England spent almost half a millennium under Roman rule

55 BC BC – Julius Caesar crossed the canal with about 10,000 soldiers. They landed in Pegwell Bay on the Isle of Thanet and were hit by a British force. Caesar had to withdraw.

54 BC – Caesar crossed the canal again on his second attempt to conquer Great Britain. He came with 27,000 infantry and cavalry and landed at Deal, but with no resistance. They marched inland and after hard fighting they defeated the British and important tribal leaders surrendered.

Later that year, however, Caesar was forced to return to Gaul to solve the problems there, and the Romans left.

54 BC Chr. – 43 BC BC – Although there were no Romans in Britain during those years, their influence increased due to trade links.

43 AD – A Roman force of 40,000 men led by Aulus Plautius landed in Kent and took the southeast. The Emperor Claudius appointed Plautius governor of Britain and returned to Rome.

AD 47 – Londinium (London) was founded and Great Britain became part of the Roman Empire. Road networks have been built across the country.

AD 50 – The Romans arrived in the southwest and left their mark in the form of a wooden fortress on a hill near the River Exe. Decades later, a town called Isca was built on the site of the fortress.

When the Romans left and the Saxons ruled, all former Roman cities were called “Keaster”. this was called ‘Exe ceaster’ and a merger of these eventually resulted in Exeter.

AD 75-77 – The Romans defeated the last resistant tribes and made all of Britain a Roman. Many British people began to adopt Roman customs and laws.

122 AD – Emperor Hadrian ordered the construction of a wall between England and Scotland to keep Scottish tribes out.

312 AD – Emperor Constantine made Christianity legal throughout the Roman Empire.

228 AD – The Romans were attacked by barbarian tribes and soldiers stationed in the country were recalled to Rome.

410 AD – All Romans were recalled to Rome and Emperor Honorious informed the British that they no longer had any connection with Rome.

Source: History on the Net