No selfless act! According to research, people are more likely to donate money to charity if they believe it will benefit themselves

If charities want more donations, they should optimize their marketing so the public feels like they are donating in person, a new study shows.

The researchers conducted experiments in which promotional postcards were sent to 540,000 people in the US state of Alaska to raise funds for charity.

Postcards highlighting the personal benefits of donating The study authors found that both the likelihood of donations and the amount donated were increased.

Highlighting selfish virtues is therefore the best way to get people to open their wallets – and could be a more effective strategy than using “chuggers” to harass people on the street. 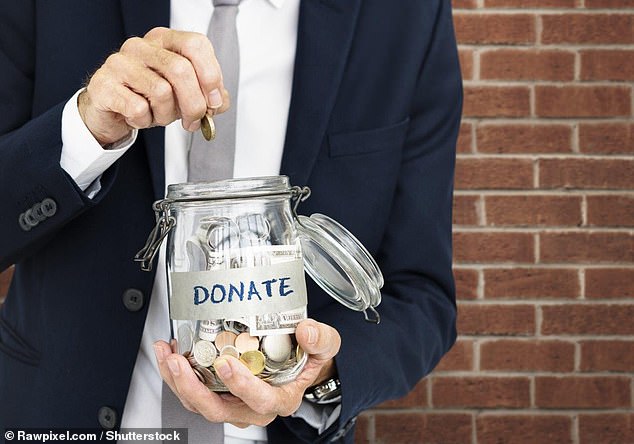 According to researchers from the US and Australia, the best way to encourage generosity is to remind potential donors that donations are beneficial to them in some way.

The research was carried out by researchers from the Australian National University and the University of Chicago.

“The results of our experiment underline the relative importance of advantages for oneself as a driver of giving,” it says in her paper.

“Our results are important to theorists and empiricists interested in modeling charitable giving, as well as practitioners and policy makers.”

Researchers have teamed up with Alaska’s Pick.Click.Give. Program to carry out their “nationwide natural field experiment”.

Pick.Click.Give. was launched in 2008 by the Alaskan government to allow Alaskans to submit their Permanent Fund Dividend (PFD) online to donate some or all of their dividends to charity.

For their study, the team randomly assigned each household in Alaska to either a control group (who did not receive a postcard) or one of two groups who received a postcard.

The postcards, mailed to some 540,000 Alaskans, encouraged them to “warm your heart” by donating to a charity or to “make Alaska better”.

The two postcards that were distributed for the experiments are shown. Postcard a) was the “benefits for yourself” postcard, which increased the donation tendency as well as the donated amounts

Those who received the postcard “warm your heart” donated 23 percent more than those who did not receive a postcard, and they donated 6.6 percent more often.

Those who were encouraged to do Alaska better were more likely than those in the control group who did not receive a postcard.

However, the former donated not much more than the latter.

“Messages highlighting the benefits to others increased the propensity to donate, but there was no evidence of an impact on the average donation size,” say the researchers.

In the year of their postcard campaign (2014), households in the Benefit To Yourself postcard group donated approximately $ 1.10 more than they would otherwise have.

This was a 23 percent increase in average donations compared to the average gift from Alaskans in the control group of approximately $ 4,766 in 2014.

If all online filers have received this message, we will appreciate that Pick.Click.Give. would have raised an additional $ 594,136.

The numbers remind charities how effective the wording of their communication materials can be.

“Our results are remarkable in that they show ways to increase giving through simple messages that speak to the donor’s self-interest and the good feelings that giving is evoked.”

The study was published in Nature Human Behavior.

At least 122 charities alleged to have wasted donation money on “unconscious bias training”.

More than 120 charities have paid for employees to receive unconsciously biased training, despite a government report stated that it doesn’t work.

High profile organizations that insist on the courses include the Alzheimer’s Society, the Red Cross and Parkinson’s in the UK.

The Telegraph’s analysis linked at least 122 UK charities with vendors.

Most charities refused to reveal how much they were spending on the practice.

Since 2015, public service managers have had to undergo such a test as part of a race awareness program.

Most charities refused to reveal how much they were spending on the practice.

The courses include training on how to create awareness of bias and how it can hinder organizations.

In 2020, ministers ordered government agencies to cancel the controversial training after an official study found no evidence that it worked.

Ben Bradley, Mansfield MP who refused to attend Whitehall training, said on the Telegraph: “Whether you tick a diversity box or show how beautiful you are, that money really should go towards charity.

“I hope the government can step in in the future when charities waste the money people donate for such things.”