A device the size of a watch can analyze sweat and detect signs of an impending and deadly cytokine storm caused by Covid-19 and other infections.

The phenomenon occurs when chemicals in the bloodstream called cytokines multiply quickly and get out of control.

These small chemicals are said to limit and control the immune system. If they go wrong, it can lead to inflammation and organ damage.

At the onset of the COVID-19 pandemic, doctors realized that patients who developed a “cytokine storm” were often the sickest and most at risk of death. 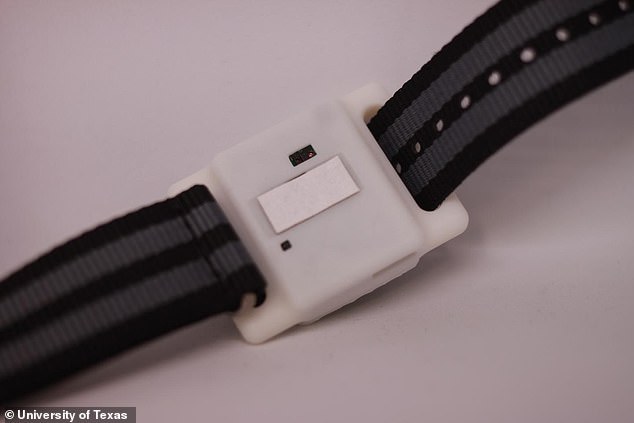 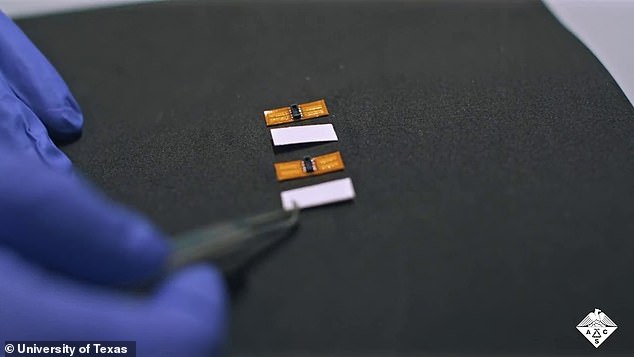 A cytokine storm occurs when cytokines in the body race through the bloodstream and make other immune cells, causing organ damage

What is the “cytokine storm” and can it be treated?

SARS-CoV-2, the coronavirus that causes Covid-19, is recognized by the body’s immune system after the pathogen has penetrated the cells.

This leads to an immune response in which the body tries to destroy the virus.

One mechanism it uses is cytokines, small chemicals that are designed to regulate the production of other immune cells and keep the process in check.

But with Covid and some other diseases, this mechanism goes wrong and too many cytokines are produced.

As a result, the chemicals get out of control and this sets off a destructive chain reaction in which they attack their own healthy and uninfected tissues and cause severe inflammation.

In many cases of Covid, this is fatal, and finding a way to dampen this process has been a priority for doctors.

Some drugs, like dexamethasone, can suppress this runaway event and allow the body to rebalance.

The anti-inflammatory drugs tocilizumab and sarilumab, recently approved for use in critical care patients with NHS, also target cytokines, but more specifically than dexamethasone.

They are also effective in reducing the risk of death.

Researchers at the University of Texas at Dallas made sensor strips with antibodies against seven pro-inflammatory proteins and tested them on six healthy people and five people with the flu, another virus that can cause a cytokine storm.

Two of the patients had elevated cytokine levels, while all participants had cytokines in their sweat that matched the expected levels based on previous examinations.

An early warning system would allow doctors to administer steroids quickly, which would reduce the risk of the cytokine storm getting out of hand, ”the researchers said.

“Right now in the context of COVID-19, you could get early treatment for patients if you can monitor pro-inflammatory cytokines and see that they are trending up even before they develop symptoms,” said study author Shalini Prasad.

Early detection is important because the excessive inflammation after a cytokine storm is triggered can damage organs and cause serious illness and death.

In contrast, if doctors could administer steroid or other therapies once cytokine levels begin to rise, hospital stays and deaths could be reduced.

Although blood tests can measure cytokines, they are difficult to do at home and cannot continuously monitor protein levels.

Cytokines are excreted to a lesser extent in sweat than in the blood.

To collect enough sweat for testing, scientists have asked patients to exercise or applied a small electrical current to the patient’s skin.

However, these procedures themselves can alter cytokine levels, according to Prasad.

“When it comes to cytokines, we’ve found that you have to measure them in passive sweat,” said the lead investigator.

“But the big challenge is that we don’t sweat a lot, especially in air-conditioned environments,” she says.

The team estimates that most people produce only about 5 microliters or a tenth of a drop of passive sweat in a 0.5-inch square of skin in 10 minutes.

Therefore, the researchers wanted to develop an extremely sensitive method for measuring cytokine levels in tiny amounts of passive sweat.

They drew on their previous work on a wearable sweat sensor to monitor markers of inflammatory bowel disease (IBD).

The wristwatch-like device measures the levels of two proteins that rise during the flare-up of IBD, and when worn on the arm, passive sweat diffuses into a sensor strip. 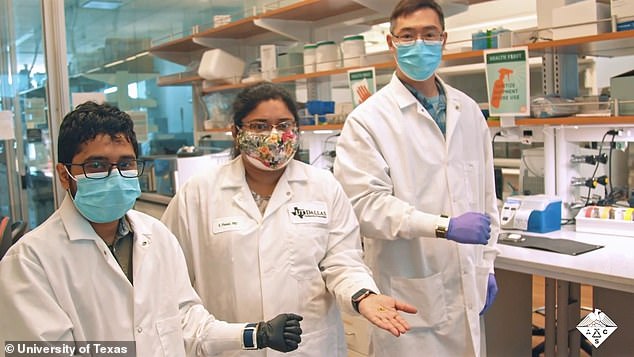 Early detection is important because the excessive inflammation after a cytokine storm is triggered can damage organs and cause serious illness and death, says study author Shalini Prasad (center picture). 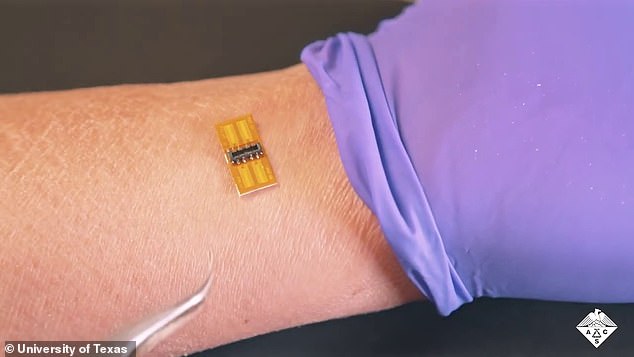 Researchers at the University of Texas at Dallas made sensor strips with antibodies against seven pro-inflammatory proteins and tested them on six healthy people and five people with the flu, another virus that can cause a cytokine storm

HOW DOES THE SWEATSENSER Dx WORK?

The wristwatch-like device measures the level of proteins that increase during the cytokine storm.

When the device is worn on the arm, passive sweat diffuses onto a disposable sensor strip attached to an electronic reader.

The sensor strip, which contains two electrodes, is coated with antibodies that bind to the proteins.

The binding of the proteins to their antibodies changes the electric current flowing through the e-reader.

The reader then wirelessly transmits this data to a smartphone app, which converts electrical measurements into protein concentrations.

After a few minutes, the old sweat diffuses out and newly excreted sweat reaches the strip for analysis.

The sensor, which contains two electrodes, is coated with antibodies that bind to the two proteins. This process changes the electrical current that flows to the reader.

The reader then wirelessly transmits the data to a smartphone app, which converts electrical measurements into protein concentrations.

After a few minutes, the old sweat diffuses out and newly excreted sweat reaches the strip for analysis.

For their new cytokine sensor, known as SWEATSENSER Dx, the researchers produced sensor strips with antibodies against seven pro-inflammatory proteins.

The device tracked cytokine levels for up to 168 hours before the sensor strip had to be replaced.

EnLiSense is now planning, in collaboration with the researchers, clinical studies with the cytokine sensor in people with respiratory infections.

“Accessing COVID-19 patients has been challenging because healthcare workers are overwhelmed and don’t have time to test exam equipment,” says Prasad.

“But we will continue to test it for all respiratory infections because the cause of the disease itself doesn’t matter – it’s what happens to the cytokines that we want to monitor.”

The results will be presented at the ACS spring meeting 2021.

People who have already caught the coronavirus “are not completely protected from re-infection,” warns the study

According to a new study, young people who were previously infected with coronavirus are not fully protected from re-infection.

Researchers at Mount Sinai’s Icahn School of Medicine analyzed data from more than 3,000 healthy members of the U.S. Marine Corps, ages 18 to 20.

They found that about 10 percent of those involved in the study who were previously infected with Covid-19 had become infected again.

The study’s authors warned that despite previous infection and the presence of antibodies, vaccination is still required to boost the immune response, prevent re-infection, and reduce transmission.

They added that young people should take the vaccine whenever possible.