By Lydia Catling for Mailonline

Worshipers wearing a human skull dance through the streets of Bardhaman, India as part of a festival that appeases a Hindu deity.

Amazing photos show the city’s residents walking into the streets in bright colors and holding onto multiple skulls.

The Hindu devotees also carried a sword as part of the Gajan Festival, which is widely celebrated in West Bengal at this time of year.

Spectators stood on their doorsteps, on the side of the road, and in front of the shops, pulling out their phones to capture the incredible display.

A select few men, wearing flowers around their necks and elaborate headdresses, were chosen to wear the skulls and often held them high above the crowd.

The week-long Gajan Festival is mainly celebrated in West Bengal and is associated with Hindu deities such as Shiva, Neel and Dharmaraj.

According to photographer Avishek Das, on the last day of the Bengali calendar in mid-April, devotees worship corpses to please Lord Shiva for better rain and better harvest, a 100-year-old traditional practice.

The central theme of the Pre-Harvest Festival is satisfaction through non-sexual pain, devotion and willingness to make sacrifices.

Elsewhere in the region, men from Krishnadevpur pierce each other with iron bars and hooks to show devotion to Shiva in hopes of a cheap harvest, the BBC reports. 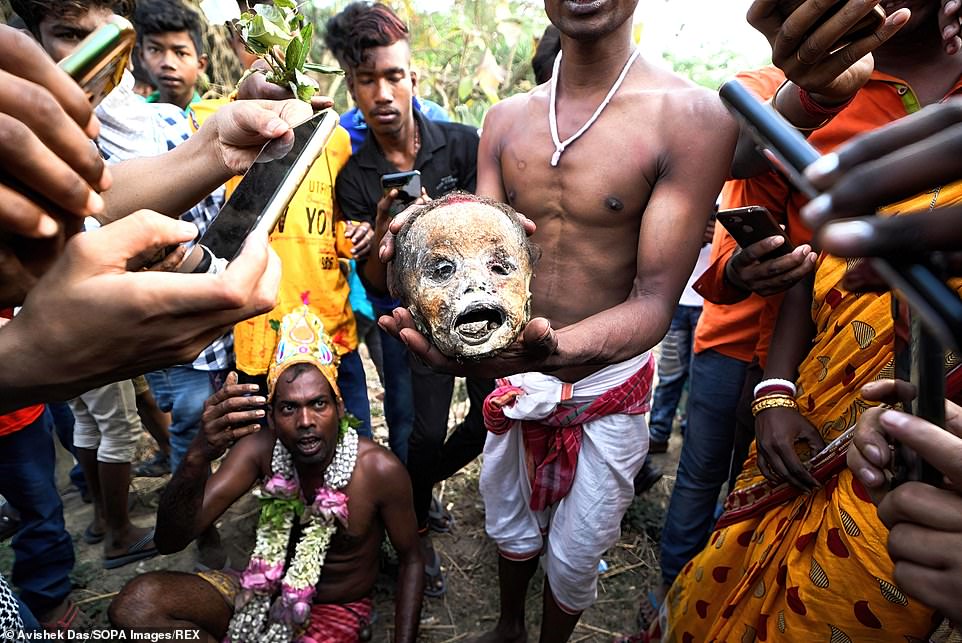 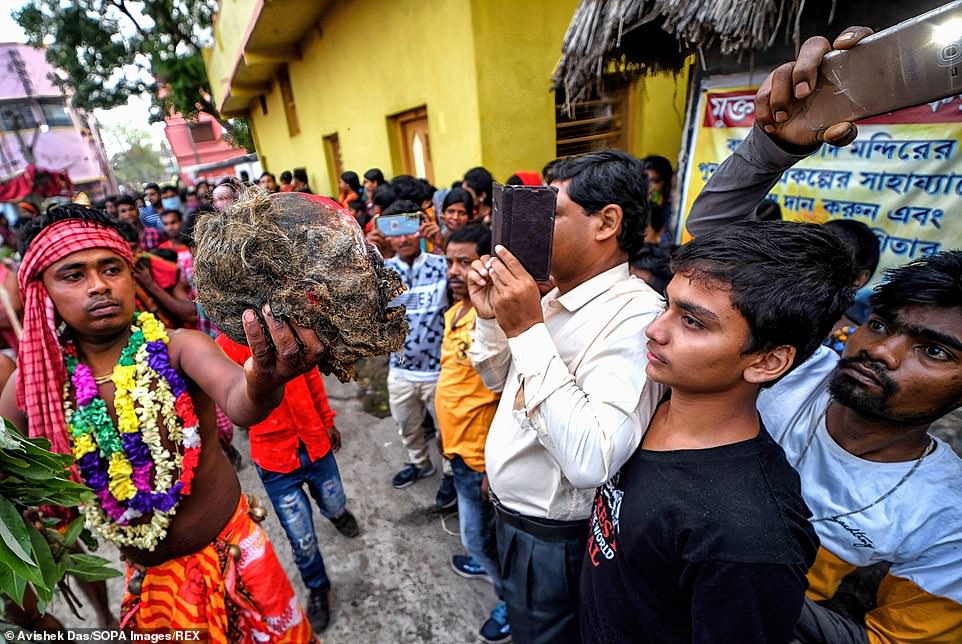 Hindu devotees held up the human skulls and aimed them right in front of cameras for passers-by who had stopped to take photos and record the unusual ritual. 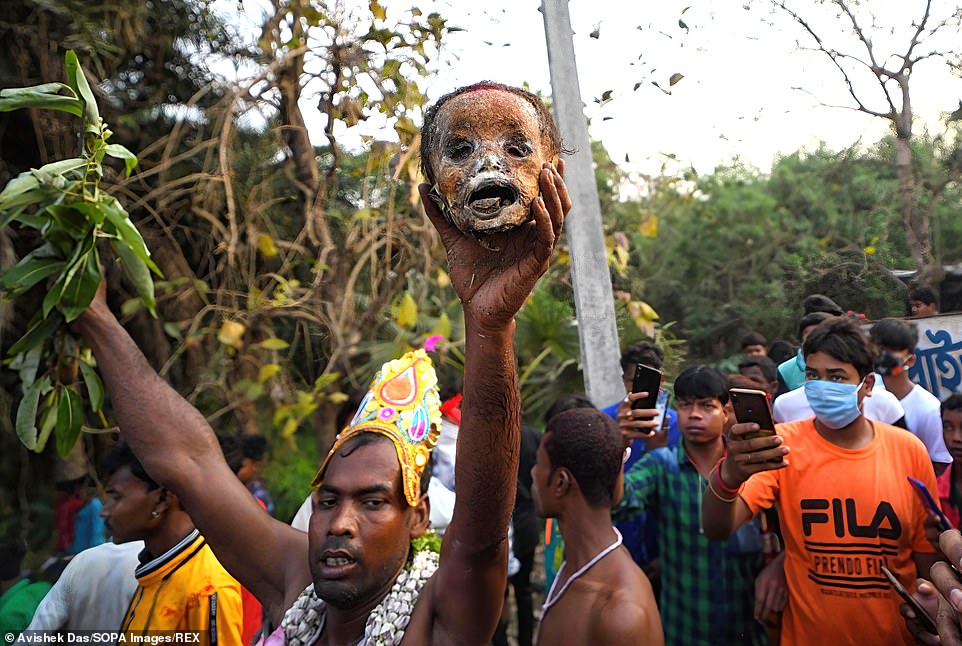 A select few, who wore flowers and elaborate headdresses, appeared to be the chosen ones to wear the skulls for the parade 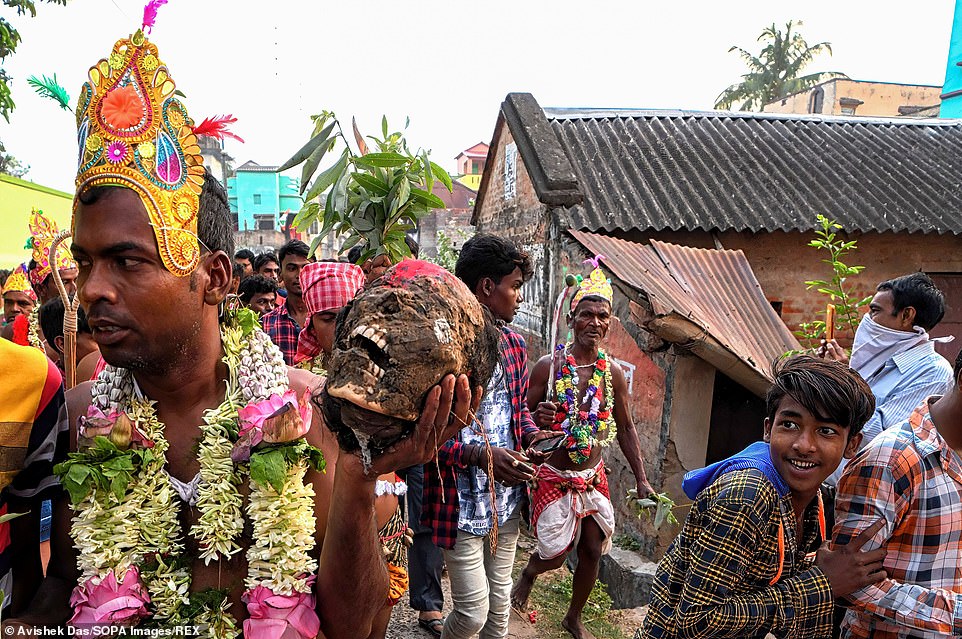 While many of those involved in the procession seem unfazed by the human skulls, others, including this little boy, were still a little careful with them 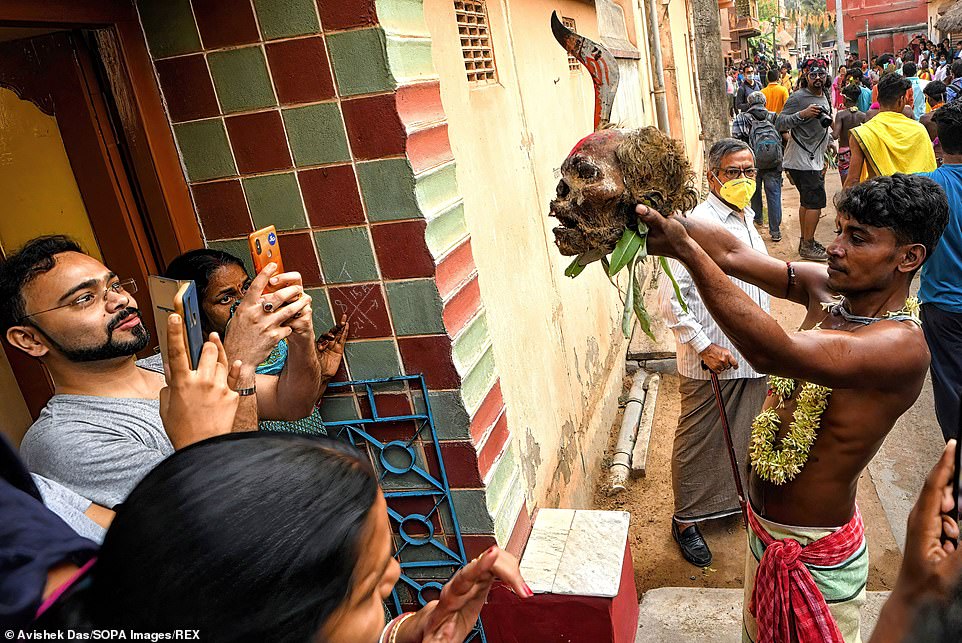 The week-long Gajan Festival is mainly celebrated in West Bengal and is associated with Hindu deities such as Shiva, Neel and Dharmaraj. Pictured: people stand on the doorstep to take photos of the festival 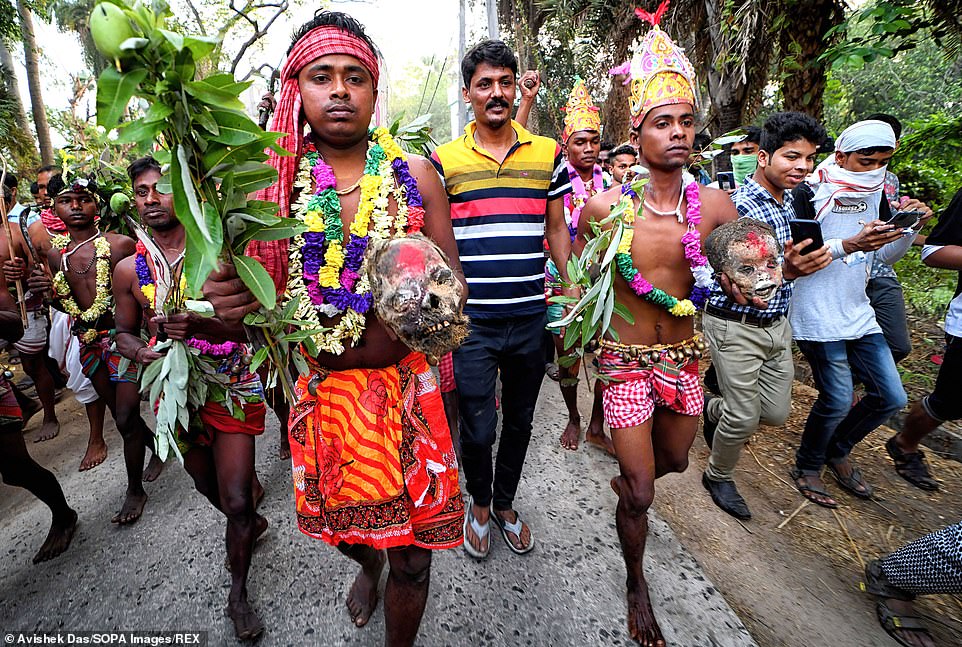 The 100-year tradition is said to take place on the last day of the Bengali calendar in mid-April, when devotees worship corpses to please Lord Shiva for better rain and better harvest 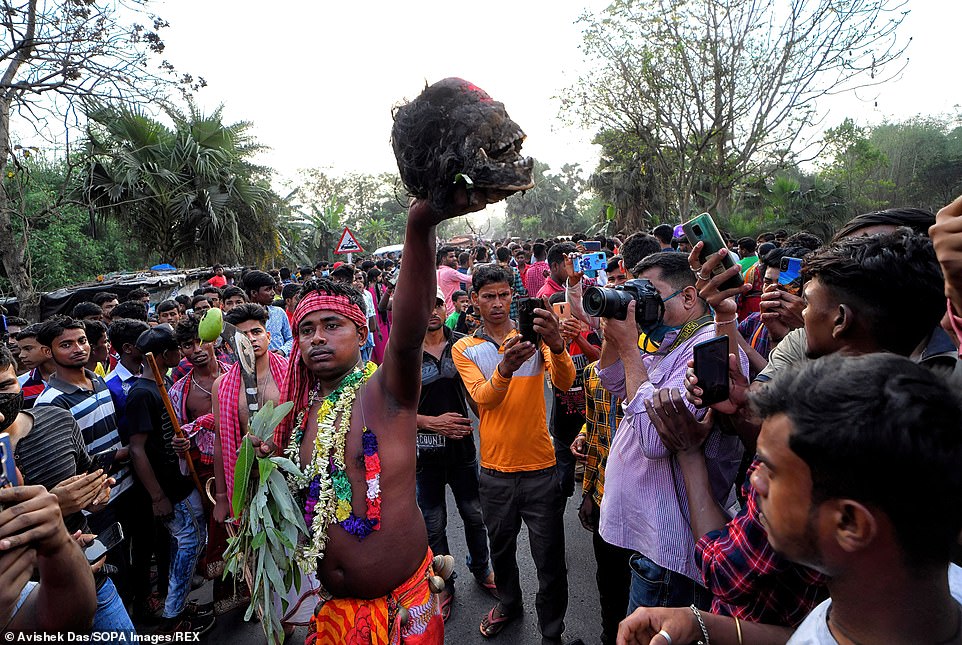 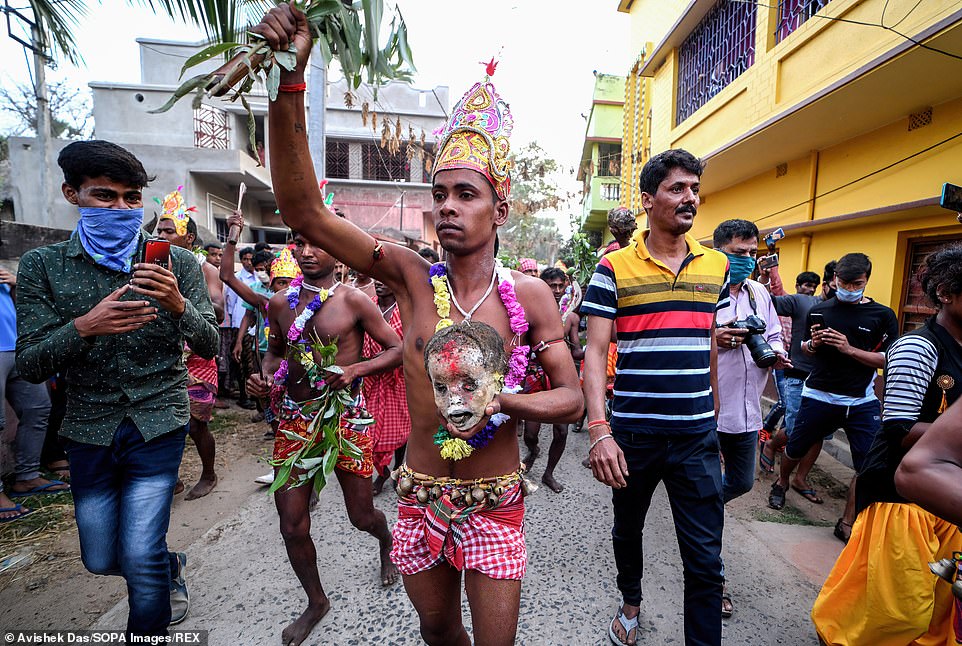 The central theme of the pre-harvest gajan festival is satisfaction through non-sexual pain, devotion and sacrifice. Pictured: a man carries a human skull down the street while people stop to take pictures 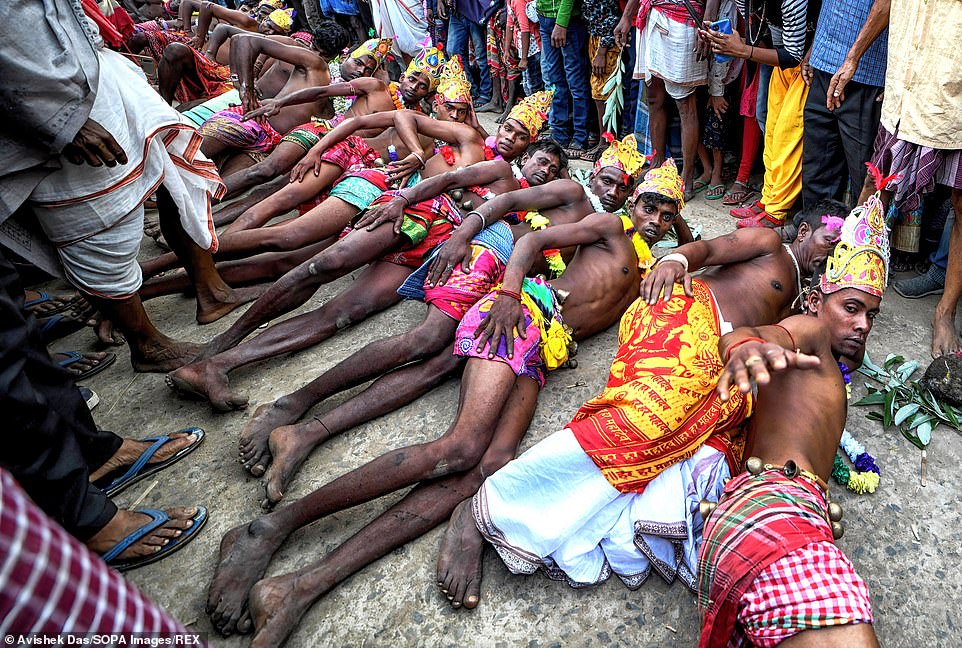 Next to the parade, the Hindu devotees put down the human skulls and take part in a traditional dance (picture)